Skip Navigation
We use cookies to offer you a better browsing experience, provide ads, analyze site traffic, and personalize content. If you continue to use this site, you consent to our use of cookies.
MAE News

On Friday, Jan. 28, MAE President Erica Jones was among over 100 individuals attending the State Department of Education’s hearing on proposed changes to the Social Studies standards for K-12.
By: Mississippi Association of Educators
Share

On Friday, Jan. 28, MAE President Erica Jones was among over 100 individuals attending the State Department of Education’s hearing on proposed changes to the Social Studies standards for K-12.

Attendees primarily attended to demand the SDE reinstate mentions of individuals and documents that are essential components of United States history. The central message of a majority of attendees who spoke was that they wanted the facts of history taught – good or bad.

The proposals had caused quite a stir among educators and the general public. They had discovered mention of the civil rights era and icons such as Medgar Evers, Mrs. Fannie Lou Hamer, and Mrs. Rosa Parks, along with the Declaration of Independence and the Constitution were to be eliminated from the Standards.

Significantly, the first order of meeting business was an announcement from the organizers that the decision had been made to put the proposed deleted items back in the standards. Public outcry had been heard and brought the desired result.

President Jones was featured in several news stories, having stepped outside for a press conference during the meeting. Here is one of the stories: Parents and others share concerns about proposed social studies standards (msn.com).

President Jones was joined by Executive Director Antonio Castanon Luna and Communications Director Pam Johnson for the three-hour event held in the Sparkman Auditorium of the Agriculture Museum in Jackson. 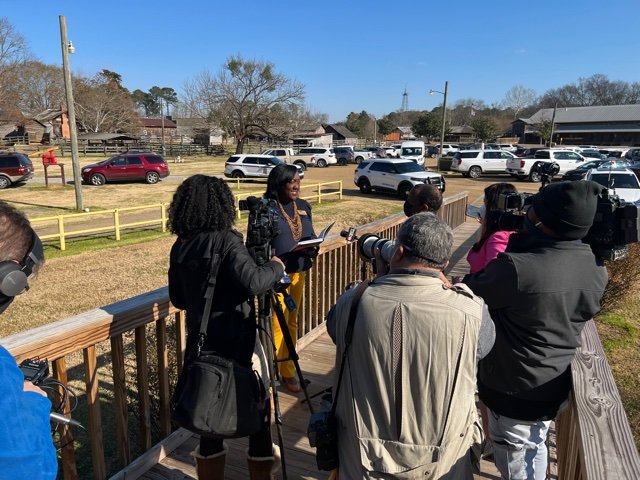 Mississippi Association of Educators (MAE) represents thousands of Mississippians—educators, students, activists, workers, parents, neighbors, friends—who believe in opportunity for all students and in the power of public education to transform lives and create a more just and inclusive society.
Contact Us
About MAE

The Mississippi Association of Educators is a state affiliate of the National Education Association (NEA), the nation's largest professional employee organization. NEA has affiliate organizations in every state and in more than 14,000 communities across the United States.