Skip Navigation
We use cookies to offer you a better browsing experience, provide ads, analyze site traffic, and personalize content. If you continue to use this site, you consent to our use of cookies.

A recent Supreme Court decision clarified how employees who have been terminated may submit appeal bonds. 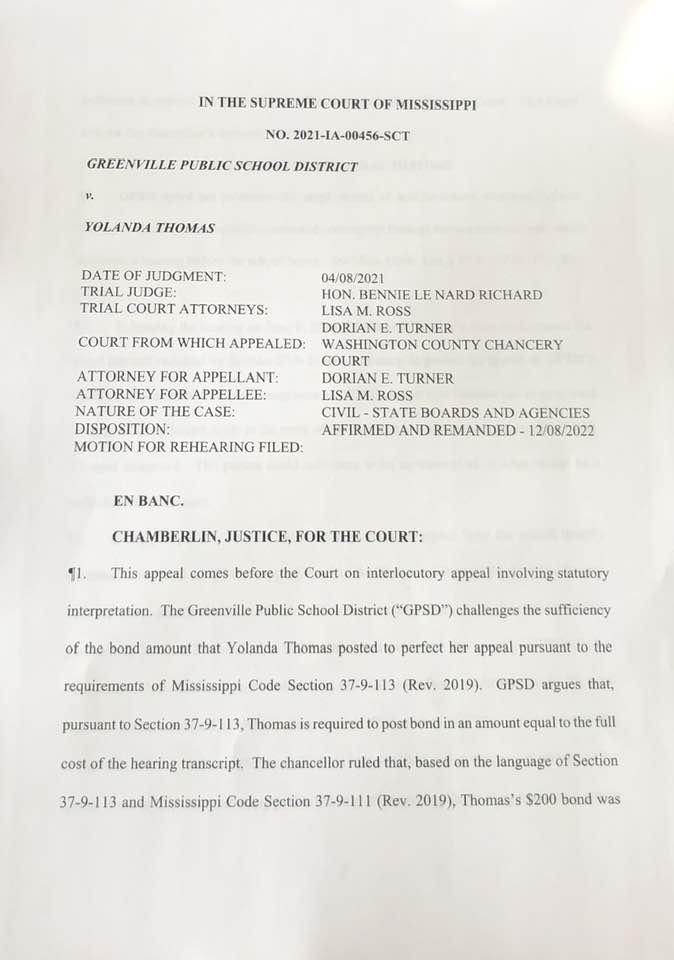 The Mississippi Association of Educators celebrates the recent Supreme Court decision that secures protection for educators whose attempt to appeal termination decisions by school boards is thwarted by an appeal bond amount.

“We believed that our MAE member had been treated unfairly, and our efforts to secure this ruling proved we were right,” said MAE President Erica Jones. “This type of legal help is a premier benefit of membership in our association.”

“We congratulate attorney Lisa M. Ross for her successful representation and MAE Member Advocate Kenneth Grigsby for his support of Ms. Yolanda Thomas,” President Jones said. “They stood up for all educators here, and their efforts will last.”

In its recent opinion of Greenville Public School District v. Yolanda Thomas, the Mississippi Supreme Court provided a resounding victory on behalf of educators throughout the state of Mississippi.  In siding with appellant Principal Yolanda Thomas, the court’s decision provides significant procedural clarity as it relates to appeals from school board decisions in nonrenewal cases.

Following a hearing before the Greenville Public School District (GPSD) School Board upholding her nonrenewal as principal, MAE member Yolanda Thomas began the process of perfecting her appeal of that decision before the Washington County Chancery Court.

Her appeal began by her submission of a $200 cash appeal bond to the Washington County Chancery Clerk’s office.  GPSD, however, argued Thomas failed to remit the amount necessary to complete her appeal. Instead of $200, GPSD contended relevant and established law required that she submit approximately $7, 717.90 to appeal the school board’s decision to chancery court.

In rendering a decision in favor of Principal Thomas, the Mississippi Supreme Court concluded that in instances where the parties are unable to agree on a bond amount, chancery court judges may weigh “relevant factors, such as the financial ability of the appellant, the expense of the transcript, other known costs of appeal and/or court costs and/or any other relevant factors and may set a reasonable bond amount.” MAE believes this is a common sense approach to such matters.

After reviewing all relevant aspects of the case, the Court ruled, “Thomas posted sufficient bond to confer jurisdiction on the chancery court and to perfect her appeal.”

The Court’s “employee-centered” approach will encourage employees to file appeals based upon the merits of their case, rather than on how much money it will cost. The Mississippi Supreme Court also reaffirmed the importance of providing aggrieved educators access to the courts if they choose to contest and correct unfavorable decisions of a school district.

Mississippi Association of Educators (MAE) represents thousands of Mississippians—educators, students, activists, workers, parents, neighbors, friends—who believe in opportunity for all students and in the power of public education to transform lives and create a more just and inclusive society.
Contact Us
About MAE

The Mississippi Association of Educators is a state affiliate of the National Education Association (NEA), the nation's largest professional employee organization. NEA has affiliate organizations in every state and in more than 14,000 communities across the United States.